"On September 22, 1998, I used my father"s car because my car didn"t have a seat belt. The seat belt was kind of broken so I decided to take my father"s car and my father told me to drop off my brother before I went to school. I preceded to go to school after I dropped off my brother and on the way back. I confronted the collision that happened on Critus and Covina Blvd. As I looked up a quarter of the block down, the light was green and I preceded to go into the intersection while the light might have changed to yellow and then red. But I was half way in the intersection when the light turned red. I noticed that there was a car coming at me on the right hand side. He preceded to come at... my guess would be 50 to 60 miles per hour (speed limit on that road is 35 mile per hour), non stop. He saw me and our eyes met but he didn"t stop. He just kept coming at me. At that moment, I felt that my life passed before my eyes and I thought that I was going to die.. I was going to die. And right when the other car hit me, at the time of impact that he hit me, I saw the bright light to shine all over and surrounded me. As I saw that bright light, I suddenly felt a peace inside me that I was gonna be OK.... that every thing would be alright. And I came out into consciousness and then I saw a cop. The cop thought that I was dead and he was feeling my pulse. I realized that I wasn"t dead! I was in tremendous shocked and I preceded to tell them that I was OK. I"m still alive. 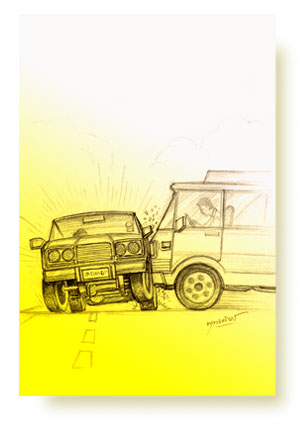 The cop had a helicopter that was waiting to airlift me to the emergency room because of the condition of the car. It was considered to be a total loss. And they thougth that there was no way I would survive that accident. As the cop checked on my condition, I was alright. They preceded to carry me out into the ambulance and they thought that I had broken my jaw, my left wrist broke. They took me to the emergency room and they ran the x-ray through. The doctor told my uncle that I was gonna lose four of my bottom teeth because my jaw was broken. But when they checked the x-ray, I was alright and my jaw was not broken. I wasn"t going to be losing any teeth. The only thing that I suffered from the accident was minor abrasions. I would say, but I still had blood cover all over my face.

The doctor was very surprised of my condition. Every body that came in to check on me was surprised. Either the cop and the doctor told me that I was in very good condition. I was lucky to be in a good condition. A man had also told my mom when she went to look at the car that the preson in the accident should have died. The guy that was there see cars coming in and out all the time said that there was the similar accident just like mine that came in lately, the person inside of it died because their neck broke. I was very lucky to be walking and pretty good condition. The doctor told me that they"re just totally surprised that I can even talk or walk. Nothing was broken in my body. They just said that it"s a miracle that I am alive. Miraculously, it only took me about a week to get back on my feet.

When my mom approached in the emergency room, she wasn"t crying. She just grasped on my hand and I was crying. My mom told me to stop crying and told me to think of the Buddha inside my stomach. When I get scared, he"s gonna protect me. So I stopped crying immediately. I began to feel comfortable the same feeling that felt when I got the impact from the other car. I felt the peace, and I knew that every thing was gonna be alright. They released me I think it was 3 o"clock. I was in the emergency room from 9 a.m.-3.30 p.m. As soon as my mom had arrived, they were ready to release me. So I came home and here I am. It"s miracle! I survived and I thank Buddha for my life."